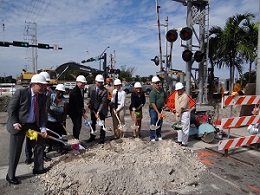 The Broward MPO, in partnership with the City of Oakland Park and Brightline, broke ground on construction of a Quiet Zone on the FEC railroad tracks in Broward County on November 14th. The event was held at NE 38th Street in Oakland Park, in front of the Funky Buddha Brewery. The event featured elected leaders from the Broward MPO Board and the City of Oakland Park, as well as representatives from Brightline, the passenger train service that will run from Miami to West Palm Beach (through Fort Lauderdale) starting in 2017. Broward's Quiet Zone was created in partnership with Brightline, as well as local municipalities along the FEC rail corridor.

"This celebration is the realization of a successful partnership between a private company and public agency that will benefit thousands of residents,” said MPO Chair and City of Hollywood Commissioner Richard Blattner. “Working together with our partners at Brightline has allowed us to capitalize on their investment and fund the Quiet Zone improvements for a fraction of the cost.”

Per federal statute, conductors are required to blow horns as trains approach at-grade crossings to notify motorists and pedestrians. When a Quiet Zone is in place, supplemental safety measures are installed at the grade crossings, replacing the train horn unless there is an imminent threat on the tracks. The Quiet Zone in Broward County will be in effect for the entirety of the FEC Railway between Hallandale Beach and Deerfield Beach.